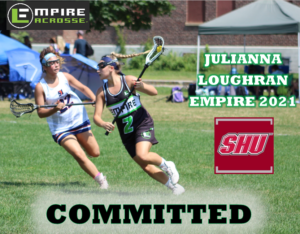 It’s a relatively common goal, but not everyone has the talent, work ethic and determination to see it through from such a young age.

From the first time she played lacrosse as a first grader, Julianna Loughran envisioned herself playing college lacrosse at the highest level. Loughran knew from Day One that she wanted to play at the Division I level, and since then, everything has gone into realizing that dream.

She didn’t pass up on her opportunity to do just that. When she visited Sacred Heart, the Empire 2021 and Hauppauge attacker knew that she’d found the right place for her and that she could play at that level.

“I worked really hard to be a Division I athlete and I had the mindset to play Division I ever since I started lacrosse,” Loughran said. “Out of all of the schools that I visited, I truly felt the most comfortable at Sacred Heart, and I was really happy with the way that the coaching staff operated and with the team bonding.”

Loughran verballed to the Pioneers, becoming the second Empire ’21 to commit after Abby Wise (Plainedge / Quinnipiac) and she’s the first player in program history to select Sacred Heart.

“I picked Sacred Heart because I fell in love with the campus and I wanted to stay close to home so that my parents would be able to come and watch me play,” Loughran said. “It’s not a huge university, and I wanted to go to a school with a small campus, but not too small. I think the campus size and the majors that Sacred Heart offers really fit me well.”

A three-sport athlete who also runs cross-country and track, Loughran is a speedy attacker who can put a ton of strain on the defense with her explosiveness, agility and speed. She’s been a consistent finisher around the net for the Empire ’21s, but she also worked hard to diversify her game and become a more consistent all-around presence. That’s a major reason why she’s a Pioneer.

“Jules is a fast, lefty finisher who knows how to get to the net,” Empire girls’ director Sean Donnellan said. “She’s always striving to be the best and plays at 100 percent at all times. She’ll never shortchange you in the effort department and it’s really cool to see her persistence and dedication pay off with a Division I commitment. We’re incredibly proud of her and we know that she’ll be a major factor at Sacred Heart.”

It’s a testament to Loughran that she was so willing and comfortable to understand what she had to do to get to that next level. Ever since she joined Empire in fifth grade, she’s played a significant role in the team’s success, and as a result, her play has evolved.

“Empire is where I’ve been the most comfortable playing lacrosse,” Loughran said. “I just loved the way Sean coached, and the coaching and this team have made me a stronger player, especially when we won championships and did well at tournaments. Sean always told me how I could improve the player that I am, and that positive feedback and advice made me a stronger player. I’m a team player, and although it’s tough at times, I’m driven, and when I fall, I always come back stronger. I’m my own biggest competition.”