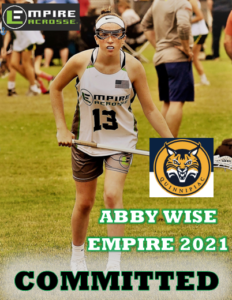 Playing everywhere gave her a different vantage point, but she’s found the spot that she’s most comfortable with. The Empire 2021 and Plainedge attacker racked up 89 points last year, good enough for 12th on Long Island, and she showed a penchant for setting others up before scoring goals herself.

“Playing every position has been fun, and where I am now lets me see how my teammates work and I just like to see how things can move around,” Wise said. “It also helps me know my strengths and weaknesses.”

It’s also helped her develop into a Division I prospect. Quinnipiac took a liking to her when head coach Tanya Kotowicz coached Wise at a a clinic, and the following day, Wise made the trip to Connecticut for the Bobcats’ clinic. After a pair of visits, she was invited to campus for an unofficial visit, one that cemented her thoughts on the school.

“When I went up there, I loved the atmosphere, and on my unofficial, I shadowed a girl on the team and went to one of her classes and to practice,” Wise said. “I loved it. You could tell that the girls worked so hard at practice, but they also had fun. Division I college lacrosse is technically a job, but you still want to have fun doing it.”

Shortly thereafter, Wise made the call to join the Bobcats’ 2021 class, becoming the first Empire ’21 to commit. She’s also the first player in Empire history to choose Quinnipiac.

“It just felt like one big family, and I wanted to be a part of it really bad,” Wise said. “One thing that I was really interested in was that even though they’re the underdog and they don’t have many championships, you could see how passionate TK (Kotowicz) was in building the program up into an amazing team.”

Wise has been a part of the Empire family since fifth grade and has played with the bulk of her teammates since third grade, so she’s been able to share in everybody’s development since then.

“I’ve been with the same group of girls since third grade and then met a bunch of new girls a couple of years later, and since then, it’s just been really cool to learn to work with other players and win this tournament and that tournament,” Wise said. “Everyone has gotten so much better with their stick skills and IQ. In third grade, we could barely catch and throw, and now, I see girls shooting BTB shots and having crazy stick tricks.”

And committing to play Division I lacrosse. Empire girls’ director Sean Donnellan has had a bird’s eye view to Wise’s development, and thinks that Wise will make a sizable impact at Quinnipiac.

“Abby is a competitor who’s always working to improve her game on and off the practice field,” Donnellan said. “She’s a leader on the field and someone we want with the ball in her stick at the most crucial times. We’re incredibly proud of her for reaching her goal, and we can’t wait to see what she can do at Quinnipiac.”